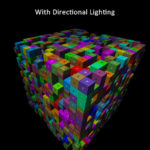 Part of a series of posts in which we write a voxel engine from scratch for Android. Previously: DevLog #001 – Let’s Build a Voxel Engine DevLog #002 – Making the First Block So we’ve talked about why chunks are important in #001, and we made blocks as efficient as possible in #002 using Draw-Call […]